Long term resident of our residential complex Jeffery Dougall recently flew a plane off the coast of South East Queensland. Read his amazing story below.

Was planned for last Sunday and cancelled due to strong winds. Today, at 6:40 am cleared for take-off from Southport airport. Headed east at 1400 feet toward Surfers Paradise. Transponder details relayed to Brisbane control tower and notified that under the supervision of a pilot of 20 years, a legally blind man with Retinitis Pigmentosa was to take control of the aircraft. We were instructed to stay a minimum of 250 meters from the coastline and fly above 500 feet and less than 2000 ft

Once over the water, we headed north along Southport lowering altitude to 600 feet flying to the right of the high rises and the beach. It was then the pilot handed control of the aircraft to me Saying, “fly straight and level keeping the beach to our left and above 500 meters and I’ll control our airspeed. I flew north leaving the topless bathers behind us. It wasn’t long before the Gold Coast, was left far behind. 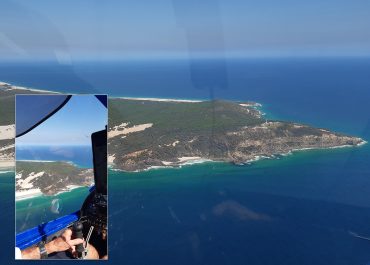 Passing Beenleigh, at a speed of 220 km. and increased altitude to 1400, below the commercial airline altitude with a Qantas aircraft speeding past us more than twice the speed on our left.

We continued following the beachline of Stradbroke Island. Brisbane airport control tower followed our flight and the pilot relayed our position every 5 minutes to Southport Ground control. After 40 or so minutes, we flew beyond Morton Island entering into the Corel sea and could see Noosa to our left, at this point the pilot took control of the aircraft from and flew us back taking a sharp turn right and headed back to Southport.

Truly a wonderful experience I’ll never forget. Next adventures on my bucket list will be sky diving, rock climbing and more.

Watch their take off from inside the cockpit below!