Let’s be honest, we’ve all thrown something in a donation bin because it seemed like an easy way to get rid of some old gear. And hey, it’s free goods for the charities to sell – they’ll take anything right? At least you aren’t wasting it by throwing it in the bin and besides, it feels good to donate to a charity who really needs your stuff more than you do. Never mind that torn shirt or those stained pants. Oh, and that chair with the wonky leg – they fix all that stuff, right?

At the end of the day, it’s all free and it’s all pure profit… right?

What if you were told that even those with the best intentions, like those described above, are costing Australia’s more than 2,500 charities millions annually in waste disposal fees and loss of revenue?

These organisations are battling the tide against nearly 60,000 tonnes of unusable products each year, which means less productivity in sorting goods, less goods for sale in the shops and increased operational costs. 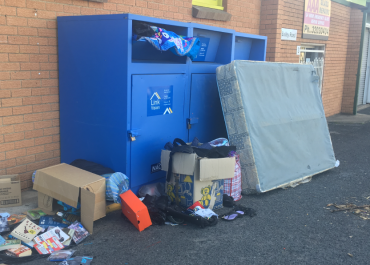 Like Link Vision, most Australian charities rely on volunteers to sort through donations and operate their shops. This is often done on a shoe-string budget and is usually the single source or main source of income for the organisation to provide vital community services.

A project team headed by Professor Sharyn Rundle-Thiele from Griffith University is about to test social marketing approaches to behaviour change to address the issue.

The team recently secured a $347,153 ARC Linkage Grant to run a project which aims to run field trials to shake up the way we view and understand the practice of donating used and unwanted goods.

“A lot of the charities in Australia are doing it tough; by increasing the quality of goods donated, charities can put more money into services by saving on the costs of processing low quality or zero quality goods handed in to them,” she said.

The project is informed by a previous report, Does your donation count or cost?, which aimed to understand the motivation of people who donate goods to charity bins.

It found that many of the people who donate to charity bins are unintentionally donating unusable items. While 40% of people are ‘champion’ donors who participate in thorough and thoughtful sorting. Around 50% of all donors don’t understand what goods can be used by charities and the remaining 10% are aware they are dumping junk but don’t care.

“It hasn’t prevented large amounts of unusable goods being placed at donation bins. We’ve found an overwhelming lack of understanding. People don’t know what’s good and what’s bad, or what goods are acceptable and what are not.”

The project team is undertaking three “postcode level” trials in social marketing, which is a form of marketing that aims to change people’s behaviour to benefit the whole of society.

“It allows us to test how much it costs, how effective it is, and how much waste is reduced; and then we can run the cost estimates across the three different [trials] to see what’s worked and what hasn’t, and the best way to roll it out nationally,” says Professor Rundle-Thiele.

One postcode, she says, will receive advertising via outlets such as a billboard, social media or cinema advertising. “It’s a very direct education campaign to give people the information they need so they can donate the goods that are usable.” 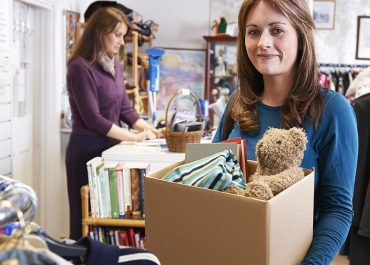 The second postcode will see donation bins replaced by workers in the busy period after Christmas and New Year.

“We’re going to talk to people who are donating and make sure we can help,” says Professor Rundle-Thiele.

“It literally allows the human sorting at the point of donation to ensure [unusable goods] never end up with the charities in the first place.”

She says this trial will be more expensive than the others, “but will definitely deliver”.

The final trial is in the throes of design but will involve employing technology at the point of donation. It will use clear signage on the bins to explain exactly what can and can’t be donated and may have a mechanism that only allows one item at a time to be donated into the bin.

With this trial Professor Rundle-Thiele wants to answer the question: “Can we use technology at the bins to create support that will modify behaviours? It’s going to be harder to pull off, but can we, through the way the bins are set up, actually achieve that?”

At Link Vision, we love our donors and we love our volunteers and we want to ensure that the right donations end up in our volunteers’ hands so we can continue to carry out the work we do for our community. So, ask yourself next time you are thinking of donating unwanted or used goods – are you a champion donor?

Link Vision initiatives, including independent accommodation for residents with low or no vision and the Computer Club are entirely funded by direct donations and through turnover from our network of Op Shops.

We would not be able to continue to provide vital services without the kind and generous support of our employees and volunteers.

*Content and images provided by Griffith University and Courier Mail